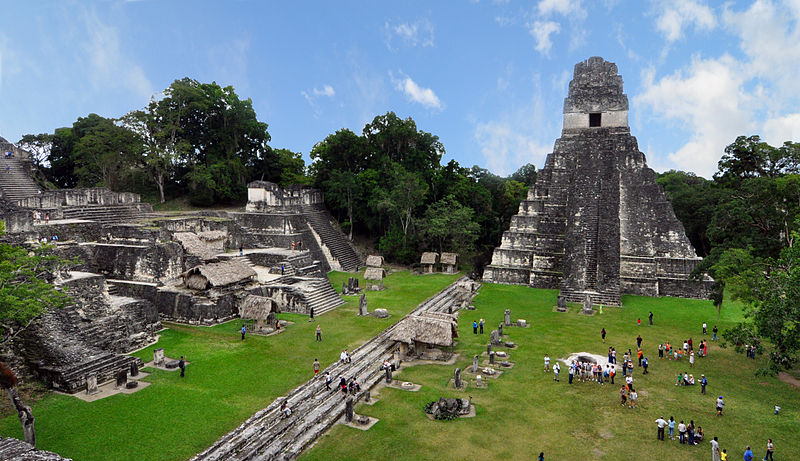 “Study the past if you would define the future” – Confucius, 531 BC

Understanding the role of climate in the rise and fall of civilisation in the past is a key indicator in preparing for the future. Until recently the Holocene (approx. last 12,000 years) 2, was thought to be a relatively stable climatic period; yet this period was in fact marked by substantial climate variability. Even the great Maya struggled to overcome some of the unstable climatic change hidden within history. Recent geographical and archaeological evidence suggests that climate change between 500 – 1150 CE 3, 4 led to unprecedented droughts which coincided with the collapse of Classic Lowland Maya civilisation. Lying abandoned desolate, these ancient cities may provide insight into our own future clash with climate change. 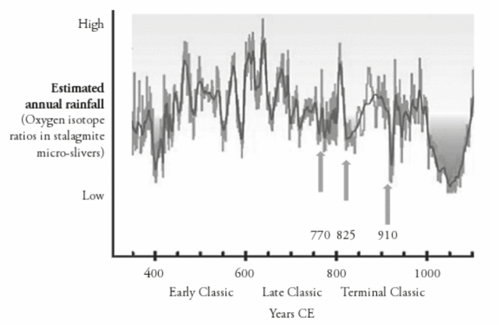 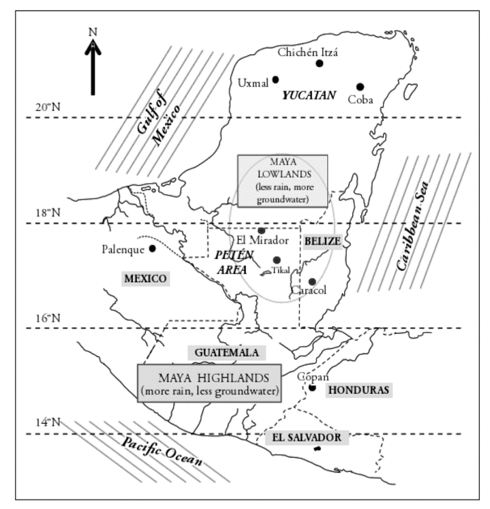 Though there was likely a number of causal mechanisms for both the collapse, many argue climate change contributed to societal disintegration 3. Some are considering the roles of volcanic and solar forcing in explaining climate variability over the past 1,000 years 1 and are asking the question: when will it happen again? Comprehending the effect climate can have on societal stability is key to preparing for the future. While there is evidence of Maya adaptation to earlier periods of long lasting drought 4 the intensity and duration of climate change likely inhibited societal recovery as seen in earlier parts of history 3. This harsh change would likely contribute to great resource and societal stresses. Evidence is continuing to be unearthed using X-ray fluorescence to measure (authigenic δ18O) calcite as well as using stable isotopes from lake sediments to reconstruct past climates. Through analysing the geochemistry of the region, it revealed a severe drying trend peaking between 500 – 1150 CE 4. For instance during 800 – 950 CE drought events on the Northern Yucatan Peninsula peaked with an immense 20 – 65% reduction in rainfall 3– precisely when the Maya abandoned many of their famous, once prosperous cities.

While correlations do not necessarily reveal the social processes at play determining vulnerability to climate change, it does offer insight. What complexities guide human responses to drought? To what extent do cultural change and environmental stress influence one another? All this and more is yet to be explored in understanding how to successfully manage human-environment interactions.

Ultimately, human response to climate change are dependent on an interplay of environmental, political and numerous societal factors. The effects of climate change is vast and global. Whether it’s the Maya 3, 4, the Norse 1, early Egyptians 2 or various Mesoamerican cultures 4 abrupt climate change likely contributed to the deterioration and ultimate demise of many cultures, settlers and societies. Internal unrest, resource scarcity and changing power dynamics can all be associated as by-products of climate change and the rise and fall of once thriving civilisations 4. One thing is certain: abrupt temperature and climate changes profoundly impact human civilisation. Through understanding the societal stresses resulting from climate change in the past, now comes the time when we must look to ensuring a prosperous future.