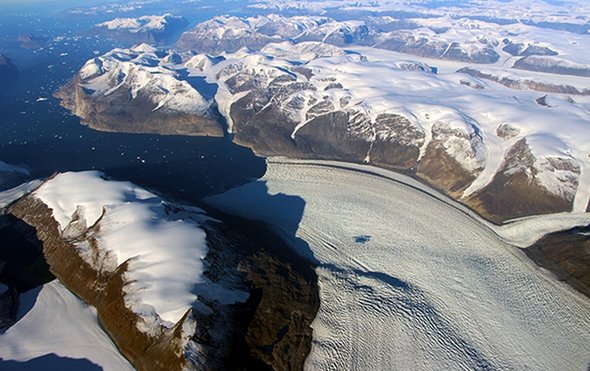 The disappearance and fate of Greenland’s Vikings hundreds of years ago has captivated and perplexed archaeologists and historians for many centuries. The Viking colonisation of the desolate island Greenland in 980 A.D. has been thoroughly documented within the archaeological record. However, 450 years later, the Viking civilisation vanished without a trace from Greenland’s history[1]. The Vikings are often depicted and commended for their savagery, seamanship, agricultural practices and their ability to conquer and trade, so what caused the collapse and disappearance of such a skilled and powerful civilization?

There are several events that could have led to the demise of the Greenland Vikings, but one leading theory, has been related to the changing inclemency climate in Greenland during the Viking occupation. The Vikings colonised Greenland during the Medieval Warm Period where they took advantage of the warming climate and thrived through farming, cultivating and trading. Coincidentally, the Viking disappearance in Greenland coincided with the onset of a cooling period called the Little Ice Age where temperatures dropped causing several destructive changes to the surrounding environment[2]. Evidence shown through the coincidental timing between the Vikings disappearance and the Little Ice Age has provided a possible theorem to what could have happened.

The fluctuation in temperature during the Little Ice Age therefore shortened crop growing seasons which consequently lead to massive crop failures and the inability to support the Vikings preferred stock, farming lifestyle, and staple diet. As the worsening climate conditions deteriorated the farm based lifestyle, evidence suggests Vikings converted and adapted to a more marine based diet and economy, becoming dependent on walrus ivory and seal. Evidence of this shift in diet is indicated by stable isotopes [3] found within Viking bones which record this dramatic change in diet.

The suggested worsening climate which the Vikings were subjected to would have exacerbate by the already present climate patterns such as the North Atlantic Oscillation (NAO). Persistent NAO phases associated with colder temperatures and an increase in storminess hit Greenland during the end of the Viking occupation in Greenland[4]. ​To illustrate the stormier surrounding seas, high concentrations of salt particles have been found within ice cores. This has led to the suggestion of what Vikings encountered towards the end of their ‘reign’ in Greenland. With the switch and increase in a marine based diet, voyages to hunt and trade walrus ivory and seal on rough seas would have been at increasing risk during the Little Ice Age and most likely led to increased fatalities.

As well as for diet and economy, the Vikings were dependent on the ocean for acquiring necessities from Scandinavia[5]. It can be concluded from the various environmental changes and evidence suggested that trade from Scandinavia diminished. With Greenland growing more inaccessible due to stormier seas and oceans freezing, no resources or vital necessities were available causing the Greenland Vikings to fend for themselves on a desolate island.

With the Greenland Viking’s trying to strongly acclimate to the cooling temperatures, in the end, their best efforts were unsuccessful. As many alternative ideas come into play about why the Vikings left Greenland, the impact of climate change on their lifestyles and culture played a vital role in the end of a skilled and powerful civilisation.