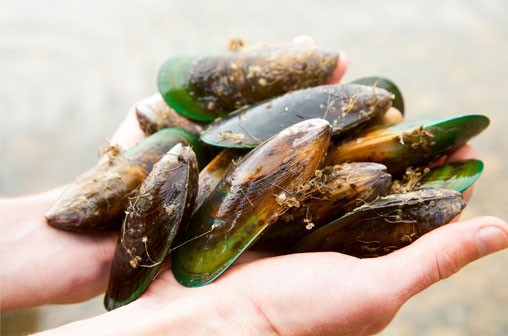 Once abundant across New Zealand’s sandy coastlines, toheroa (a large surf-dwelling mollusc) and green-lipped mussels have experienced serious population decline. The popular taste of these two shellfish sparked two booming commercial industries in the early 20th century, but by the 1970s both species had been gravely overfished, forcing the closures of shellfisheries nationwide.1,2 Globally, more than 85 percent of shellfish ecosystems have been impacted by human activity – closer to home, the shellfish loss has important ecological, cultural and economic impacts.3

The importance of mussels and toheroa

Beyond providing a culturally significant food source for New Zealanders, mussels and toheroa play a critical role as “ecosystem engineers”.4 By filtering up to 350 litres of seawater and sediment per day using specialised gills, these bivalves remove large amounts of particulate matter from seawater.5 Not only is organic matter absorbed, but toxic contaminants are “hyperaccumulated” too.6 Although beds can be buried by too much sedimentation, these species’ ability to absorb nitrogen means shellfish beds can be effective in reducing the effect of high intensity farming. The effect of urban pollutants (including painkillers, cleaning products and PCBs) can also be reduced by these incredible ocean cleaners.7

What has caused the decline?

Many factors negatively affect shellfish. Increased sedimentation can bury them, toxins can poison them, and long-term, ocean acidification threatens their fundamental ability to build shells.[1],10 In the case of green-lipped mussels, the indiscriminate fishing technique of dredging (involving the dragging of containers along the seabed) destroyed mussel beds throughout the North Island and the top of the South. The entire Hauraki Gulf was dredged from 1920 to 1969 – some estimate just 0.01% of mussel beds were spared.8

For toheroa, their habitat in the surf makes them vulnerable to predation by humans, birds and fish. Despite a fishing ban being in place since 1982, vehicles driven on beaches, poaching and variation in natural forces (such as tidal and wind variation) continue to threaten the species.9

Hope on the horizon?

The establishment of an aquaculture industry in 1965 means mussels now have a large, stable population, but the naturally-occurring mussel beds destroyed by dredging are yet to recover.9 Promisingly, in 2013 the Mussel Reef Restoration Trust began re-establishing these beds by releasing 130 tonnes of mussels around the Firth of Thames, Waiheke Island and the Mahurangi Harbour. Dr Andrew Jeffs, who has been involved in the project, says the mussels have successfully embedded, and have had immediate effects on sedimentation reduction.8

A fishing ban in 1982 has not resulted in the toheroa’s recovery. Extensive riparian plantings and research undertaken by concerned community groups may help improve toheroa habitat, but the natural factors affecting toheroa have hindered population recovery.1

Evidently, simply closing shellfisheries hasn’t successfully restored these species’ populations. Further investment and research is required to assist their rejuvenation. Ultimately, ecosystem restoration might be best driven by changes on land – as Dr Jeffs stresses, “we’re losing 250 million tons of soil a year, and once it gets in there it has a devastating effect on the marine environment… we’ve got to tidy up our land management”.8