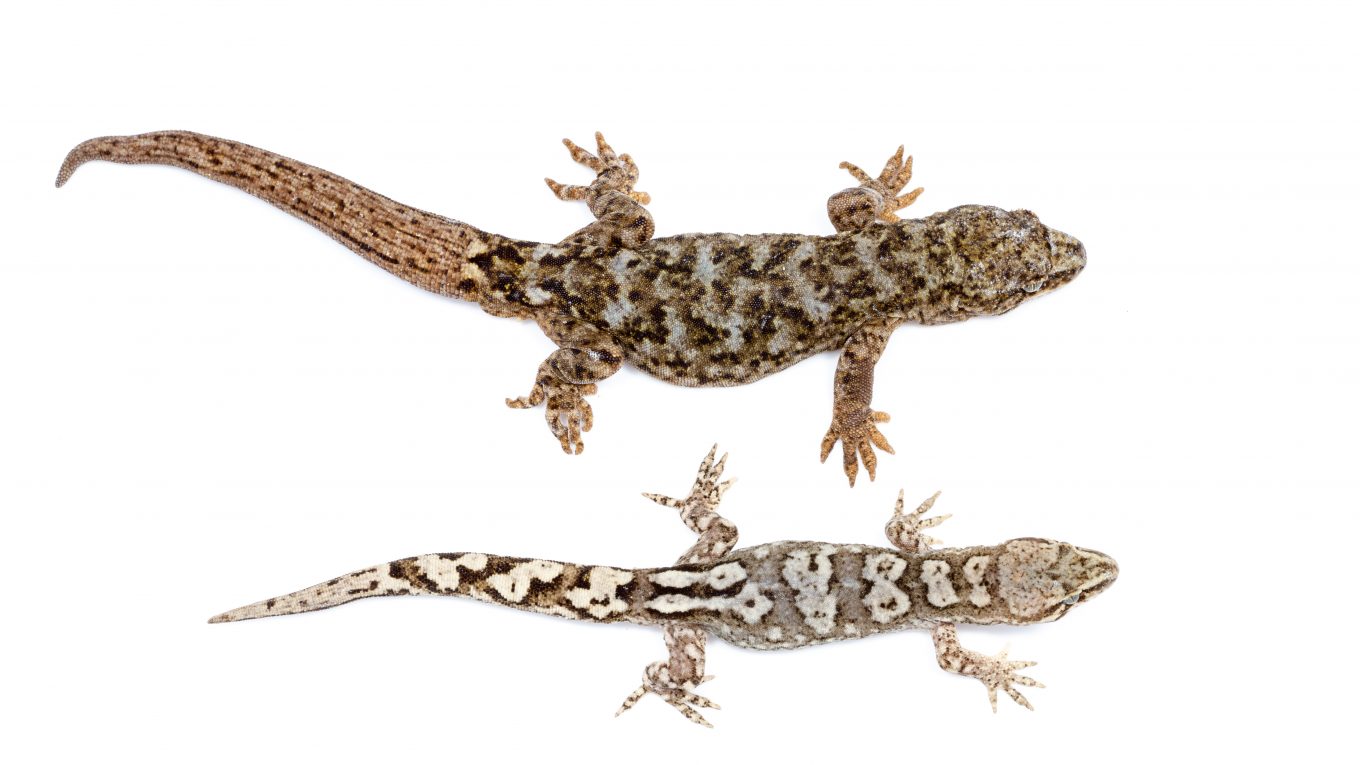 Photo (above): Two geckos from the Woodworthia genus complex. Once classified as a single taxon, over a dozen species have now been identified – many of which await formal description. Pictured here are Woodworthia maculatus (above) and the undescribed Woodworthia sp. “Marlborough Mini” (below), which are sympatric across parts of their range. Photographed on the Nelson coastline. [Photo: Jozef Polec]

A species is defined as a group of living organisms, consisting of similar individuals capable of exchanging genes or interbreeding1. Biologists use taxonomic classification to categorize and rank organisms based on shared characteristics. A species is the lowest unit of taxonomy and is assigned a unique binomial (two-term) name. This allows scientists to keep an organised record of all the unique and different forms of life on earth – just like an address book contains the phone numbers of everyone living in a town.

However, things aren’t always clear-cut when it comes to delineating species. The criteria for species definition is sometimes blurred, as the gradational aspect of variation in biodiversity is not entirely represented2. This can lead to potential species being overlooked, resulting in cryptic, or hidden, biodiversity. Cryptic speciation is a biological process that results in a group of species (which, by definition, cannot interbreed) containing individuals which are morphologically identical to each other, but belong to different species3. This is known as a species complex, where additional species are hidden under a single species name – an analogy could be drawn to Russian dolls.

Cryptic species differ subtly, if at all, in morphology – despite being genetically distinct. As a result, unique organisms can go unnoticed and the different taxa are “hidden” under a single species name. You can think of the cryptic species concept like Russian dolls. [Photo: Stephen Edmonds – CC BY-SA 2.0]

A cryptic species complex typically comprises a monophyletic group, or clade, of organisms that have recently diverged from a common ancestor. It is uncertain whether evolutionary processes can be specifically linked to the causation of cryptic species4. Populations can be isolated over time due to abiotic factors in the landscape, and ecological processes such as niche partitioning may also play a role. Identifying cryptic species requires studying small dissimilarities in morphology, behaviour and life history5. For some species that exhibit extreme physiological resemblance, only genetic methods such as DNA barcoding can reveal where the differences lie6.

New Zealand’s lizard fauna features a high level of cryptic biodiversity. Prior to 1980 only 34 species of skinks and geckos were recognized7, and currently over 110 species are known with more being discovered8. Taxonomic revisions have uncovered many hidden species, with overlapping morphological characteristics and wide variation within many species across their range. A recent revision of the spotted skink (Oligosoma lineoocellatum) in 2017 using mitochondrial DNA sequence data found the taxon was comprised of four distinct species. Three of the four species previously recognized as a single, widespread taxon are now classed as threatened with extinction by a combination of invasive predatory mammals and land use change9.

The concept of cryptic biodiversity has important implications for conservation ecology. Particularly, how populations of a species are managed and protected10. One way of looking at biodiversity is how many organisms are classified. If a species is found to comprise of a cryptic species complex, then suddenly the distribution range and population size for each new taxon will likely decrease and the threat classification will become more serious11. For an ecosystem-scale approach however, the overall amount of genetic variation a given habitat contains is an important consideration12. A case could be made that all populations of a species are valuable and should receive protection on the merit of genetic diversity alone.

More variation is better in the face of a changing world; when populations become small and isolated, they don’t have the necessary ability to be resilient in the face of change13. Managing genetic diversity is a fundamental element of species conservation, and cryptic biodiversity is an important factor to recognize.