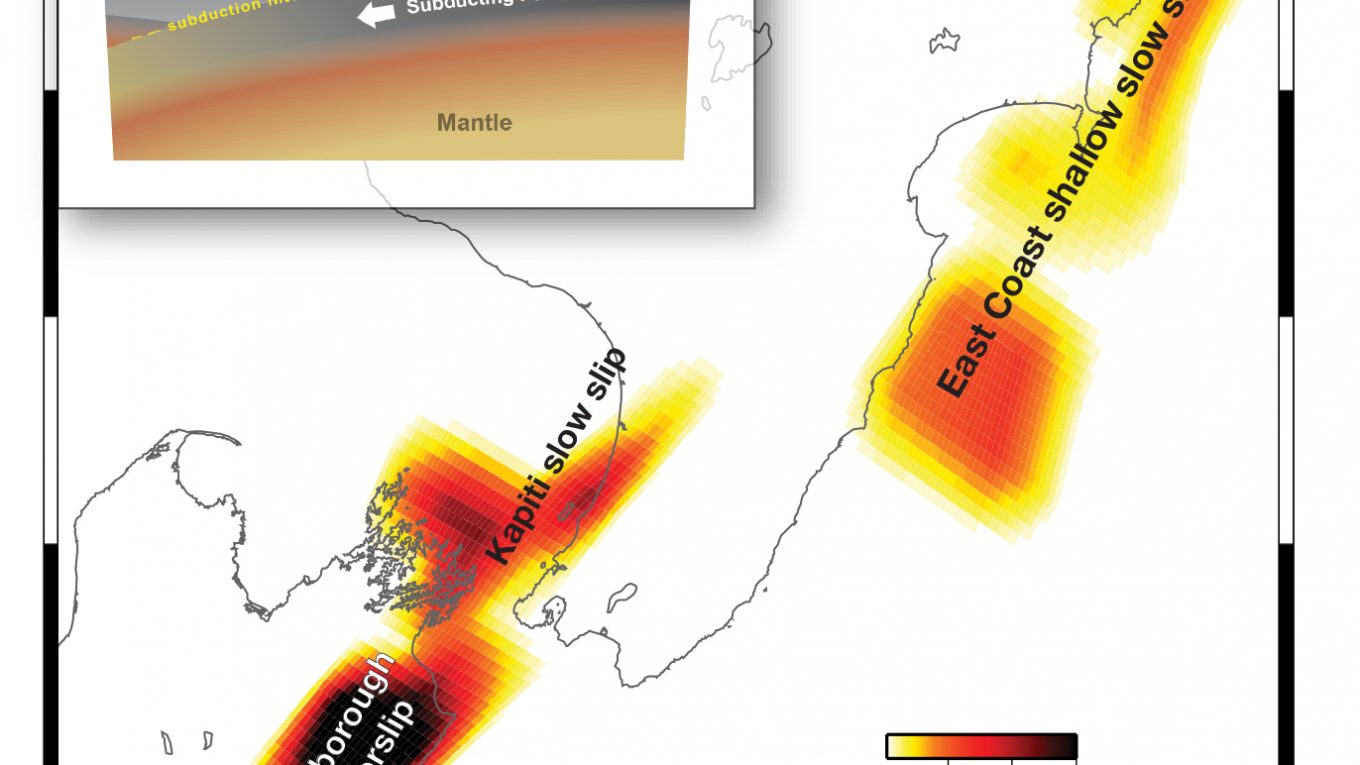 Did you know there may be a significant earthquake currently occurring under your feet?

No? That is because it’s a slow-slip event, a new discovered phenomenon that is changing how we think about earthquakes and the risks they pose to NZ.

Firstly, a slow-slip event is different to a traditional quick and violent earthquake. Slow-slips occur over a period of days or months, over large areas (ie Kapiti Coast in 2013) [1].  They occur in subduction zones, where one plate dives under another, meaning that huge sections of a plate can move during an event.

So why could these be a risk? The important factor is the effect they have on other areas and faults1. They have the ability to both increase or decrease stress on faults, either postponing or hastening a rupture. While avoided events are difficult to observe, there are suspected quakes caused by an increased in stress. The 2014 Eketahuna earthquake and 2011 Tohoku earthquake2 are two examples.

For the M6.2 Eketahuna quake, a slow-slip the year before in the Kapiti may have loaded more stress on the fault, triggering a rupture1. More importantly, for the Tohoku quake, increased slow-slip movement occurred in the years and days before the megathrust (a significant rupture along a subduction zone)2. Fig. 1. shows the seismic events leading up to the rupture. Scientists concluded that it was possible for a significant earthquake to occur on a fault that had undergone slow-slip movement due to the events before the M9.0 megathrust rupture2.

This is important to New Zealand as there is a large section of the subduction zone locked under Wellington, as shown in Fig. 2.

Due to other interfaces moving, additional stress may be being placed on the locked Wellington/Wairarapa (lower Hikurangi) section. If this were to rupture, a devastating megathrust could occur. The M7.8 2016 Kaikoura event itself was a near miss for Wellington.

Business massed a loss of $1,250,000 to Wellington businesses per week and up to $600m of insurance claims were laid in Wellington business alone3. While loss of life did not occur in the city, experts warned that if the quake had struck during office hours, there would have been deaths. 8 building were significantly damaged, with floors collapsing in the Statistics House building4 and many buildings later closed after safety revaluations. <80% of damaged buildings were on reclaimed land3, thus a megathrust quake would lead to massive damage in these areas if a M7.8 could induce this much damage.

Another associate risk is climate change. As sea levels are expected to rise, tectonics could potentially delay the effects. However, during the Tohoku quake, the locked section released, causing up to 1m subsidence along the coastline5. Although subsidence would be expected during a Hikurangi earthquake, this could be exacerbated by climate change driven sea rise. Additionally, with more water in the ocean, tsunami risks could be increased by <50%, as Macau anticipates by 20606.

There is a bright side however, our understanding of the complexities of slow-slips is only increasing and we already know substantially more than we did 5 years ago, thus we may know enough in the future to predict such events and decrease the risks associated for NZ.