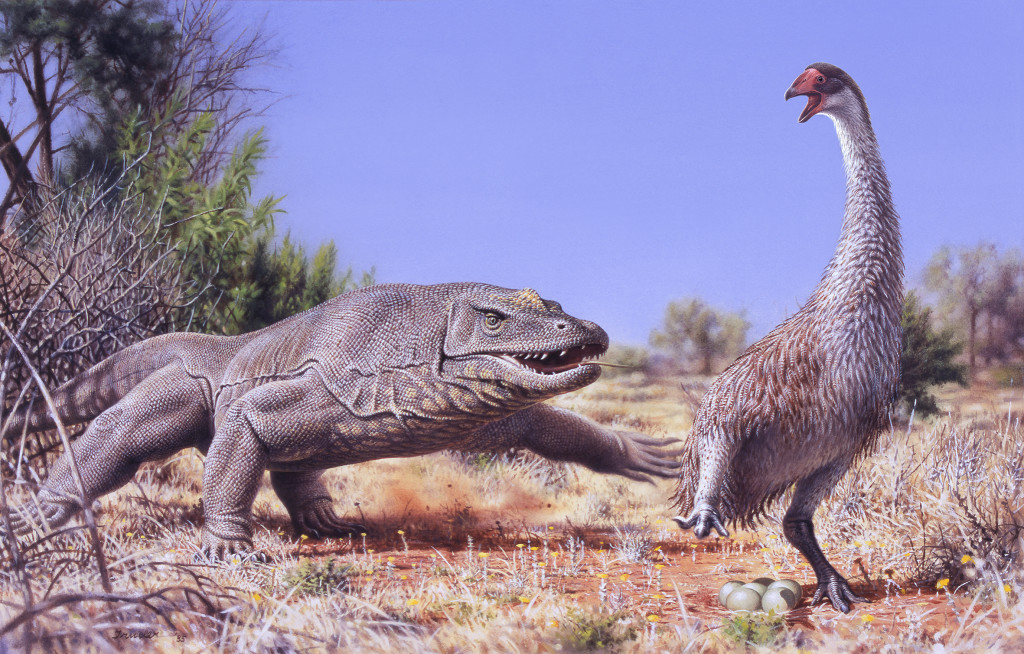 Over the last 150 years, the reason for Australia’s megafauna extinction has been greatly debated. From human lit fires to climate changes, there are many theories for exactly why it occurred (Brook & Bowman, 2002). The megafauna are characterised by animals which were 45kgs and heavier, and those that had 130% the body mass of their closest living relatives. This included giant wombats, 2-3m tall kangaroos, Tasmanian tigers and 500kg flightless birds (Gabbatiss, 2016). Human colonisation occurred approximately 50,000 years ago in Australia but the megafauna extinction dates are still debated. Due to the timing and the spatial distributions, it is often highly argued whether the extinction was driven by human induced effects or natural environmental stressors. While the idea of megafauna sounds otherworldly and mythical, there is evidence for the huge animal’s successful lifestyles and their eventual extinction.

There are many likely hypotheses for detrimental human effects that led to the extinction. For example, the ‘Overkill Theory’ explains that hunting of large animals soley decimated populations for fur and meat (Brook & bowman, 2002). If a long overlap of time between the animal and human interaction was true, it is likely that an equilibrium was reached. However, if it was a short overlap – this could signify a breakdown between the predator-prey relationship and therefore over-hunting could be the leading cause.

There was also found to be an ecological shift around the period of colonisation and megafauna extinction. Carbon dating from egg shell and tooth data suggest this to be around 50-45 thousand years ago where there was an increase in effective moisture and a weak but constant monsoon after 45 thousand years ago (G. Miller et al., 2005). Or, it is described that the ecological reorganisational changes may be due to the systematic burning of bush and flora. Masses of land were found to be burnt periodically for bush clearance, settlements and hunting and therefore may have changed the landscape compositions from nutrient-rich grasslands to fire adapted soils (Saltré et al., 2019).

One theory describes that the extinction preceded human arrival all together. Studies found that the Middle and Late Pleistocene may be closer to the true age of Australian megafauna and therefore is unrelated to human involvement (Wroe et al., 2013). The Last Glacial Period which occurred in the Pleistocene is likely to be when the animals arose and struggled to endure the arid and warmer temperatures (Australian Museum, 2018).This is supported by the evidence of notably reduced plant diversity which would restrict any herbivorous diet and lead to smaller populations or extinctions (Malhi et al., 2016).

While there are many hypotheses, theories and ideas, it is clear that there is a lot of conflicting data and no clear explanations. It is possible it may be a combination of the many different theories. More analyses and tests need to be run as a lack of data prevents any clear conclusion but this provides new, exciting future discoveries and conclusions that are yet to be made.

Fig. 2. Skull of a Marsupial Lion (Retrieved from http://www.bbc.com/earth/story/20160208-the-lost-giants-that-prowled-the-australian-wilderness)

Wroe, S. (2013, May 28). Climate change frames debate over the extinction of megafauna in Sahul (Pleistocene Australia-New Guinea). Retrieved March 6, 2020, from Proceedings of the National Academy of Sciences of the United States of America website: https://www.pnas.org/content/110/22/8777