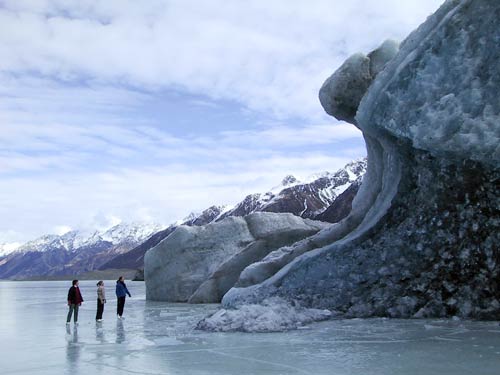 Ice here, ice there; in New Zealand (particularly the South Island), there is always ice near. New Zealand is home to many glaciers, around 3100 to be precise[1]. So, what exactly is a glacier? A glacier is a body of ice that moves due to its own mass and is at least one hectare in size (slightly smaller than a rugby field)[2] [3] [4] .The presence of a large glacier is unmissable, carving out U-shaped valleys and altering the landscape dramatically from what it once was. Over the past century, glaciers in New Zealand such as Franz Josef and Tasman Glaciers have drastically changed length through the processes of advancing and retreating.

Franz Josef Glacier in the Southern Alps is an example which shows how much a glacier can change in the space of a century. Throughout the twentieth century, Franz Josef Glacier had generally been retreating, but then in 1983, the glacier entered a period of advancement5. Over the next 25 years (from 1983-2008), Franz Josef advanced almost half the length that it had lost earlier in the 20th century (prior to 1983). This period of advancement was not set to continue, however, as following 2008 the glacier then lost more than 1.5km of its length5.

Franz Josef Glacier advancing in the late 20th century was not an isolated case, however, it was still unusual. Between 1983-2008, around 58 glaciers in New Zealand saw a period of advancement[5]. During that same time, however, other glaciers such as Tasman Glacier saw drastic retreat, so much so that a glacial lake formed at the end of it during the 1980’s and the glacier has since lost over 5km of its length[6]. Overall, glacial retreat outweighed any advancement and the glacial mass of the Southern Alps reduced by more than 10% between the years 1976-2005[7]. The figure inserted below shows how the length of four well known glaciers in New Zealand have changed since 1900.

What is causing all this advancing and retreating, you may ask? Glaciers are highly sensitive to the climate and respond to variables such as the temperature or precipitation changing, even if the change is minor. It is thought that the cause of some glaciers advancing in the late 20th century in New Zealand was lower temperatures around the country and the Tasman Sea, consequently resulting in more snow and slower melt [8].

The past century has been one of dramatic change for many glaciers in New Zealand, and for the most part it has meant their retreat. Will we still have glaciers in another five hundred years? One hundred years even? The future for glaciers is uncertain, but for today these flows of ice remain a distinctive part of the landscape.

[8] Balance, A. (2017). The unusual case of the ‘growing’ glaciers. https://www.rnz.co.nz/national/programmes/ourchangingworld/audio/201834024/the-unusual-case-of-the-‘growing’-glaciers