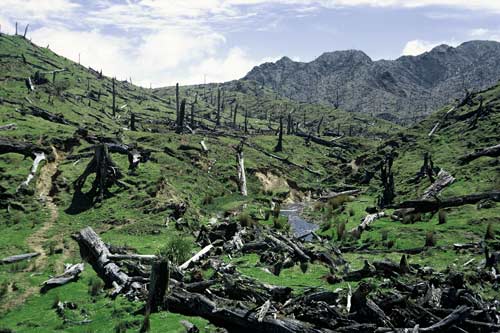 New Zealand’s diverse landscape, lush vegetation, and expansive agricultural plains are quite literally rooted within its soil. Our ability to enjoy, live, and operate along our coasts, to maintain productive habitats for non-human animals, and to continue our economy in New Zealand is all dependent upon stable and resilient soil systems. However, as our soils are currently being lost through erosion processes at 200 million tonnes annually, this rapid yet largely unseen process poses vast threats to our social, economic and environmental lifeways5. We must stick to our roots as New Zealanders and slow these drastic changes in landscape before it’s too late.

Although erosional processes occur naturally through wave activity, wind and rainstorms, and freeze-thaw temperature fluxes, they are accelerated through human-caused or anthropogenic influences1. When complex root systems are removed from the soil, this simultaneously removes the structural integrity of soil systems, thus rendering them far more susceptible to storms and weather events3. Particularly within New Zealand, the coastal development, deforestation and agricultural practices have largely attributed to the rapid increases in coastal degradation1.

Agricultural products rely on healthy soils for their 50 percent contribution towards New Zealand’s export economy6, however, these intensive agricultural practices weaken soil resilience to natural weathering processes through exhaustive grazing and natural soil nutrient level through fertilizer use3. As 44 percent of annual soil loss comes from pastures, there is clear indication that agricultural techniques must be promptly revisited in regard to prioritizing long term soil system health, rather than maximizing product yields.

As a ‘underpinning of New Zealand’s economy’ stated by Deputy Secretary at the Ministry for the Environment6, soil health is integral not only to our $33.4 billion-dollar agricultural economic sector, but more importantly, the workers who depend on these jobs to support their livelihoods6. Due to the nutrient loss within soils that occurs during erosion processes, the overall soil productivity and subsequent economic potential from our soils is tremendously degraded. With the loss of productive soils for agriculture comes loss of job opportunities. As of 2015, soil erosion processes were attributed to cost $250 to $300 million annually2.

Placing the economy aside, the accelerating coastal erosion process poses an unsurmountable threat to coastal communities in New Zealand. With increased erosion along the coasts comes increased susceptibility to coastal storms, housing and infrastructure loss, and drinking water contamination5. Solely within Christchurch, as of 2016, 6000 properties—including school systems–were listed as susceptible to erosion with nearly 18,000 predicted to become at risk within the next 50 to 100 years4.

Not only does this vastly threaten our infrastructure and economy, but our biodiversity and ecosystems across the country. With already one of the highest biodiversity extinction rates on the planet5, the national average rate of soil erosion of 720 tonnes per square kilometer will continue to alter and eliminate habitats along coastlines and fragment ecosystems5.

Coastal erosion rates in New Zealand unfortunately are not slowing down. With increasing intensity of storm surges, weather events, and sea level rise perpetuated by climate change, erosion processes will continue to be expedited. Due to the time-sensitivity and multifaceted nature of erosion processes, it must be urgently and properly managed to minimize future impacts.

6. Woodford, K. (2019, October 19). Agricultural GDP catches well under one quarter of the agribusiness system. As such it fails to capture the importance of agribusiness to the economy. https://www.interest.co.nz/rural-news/102105/agricultural-gdp-catches-well-under-one-quarter-agribusiness-system-such-it-fails