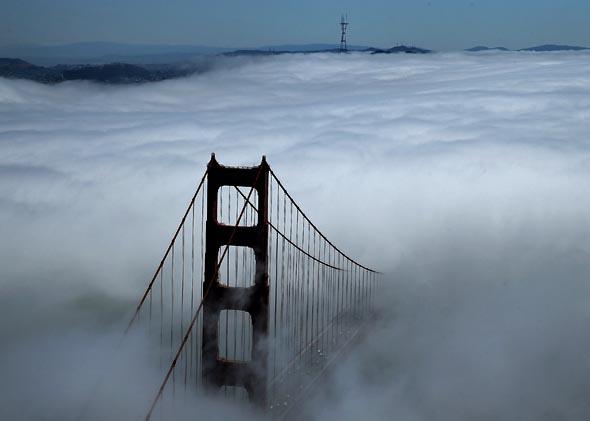 What would you say if I told you there are immense rivers flowing through the sky? You’d probably say I was crazy; after all you have never seen such a thing.

But in fact, these “atmospheric rivers” are indeed flowing, flowing faster and carrying more water than you have ever seen in a land lying river. Atmospheric rivers (ARs) can be thousands of kilometers long, hundreds of kilometers wide, and can flow up to 30 kilometers an hour (1). That’s about five times faster than the Colorado River, a white water rafting favorite. While these large waterways may be called rivers, they do not carry liquid water that you might observe in your water bottle, but instead they are transporting mass amounts of water vapor.

These enormous flying vapor rivers are important because they deliver the majority of coastal region precipitation (2). California, for example, relies on ARs to provide up to half of its water supply (3). The ARs release water to coastal regions when they run into mountainous zones. This collision pushes the vapor upwards and it cools, which makes orographic clouds (a fancy phrase for clouds above mountains) form and the water vapor they hold is released in the form of snow or rainfall (Figure 1). In places like the California Sierra Nevadas, ARs are the main deliverers of snow, and therefore water supply, to the region. California, like many territories, relies on snowpack for water supply during the drier summer months.

As climate change progresses, areas reliant on ARs, such as California (the world’s fifth largest economy), are going to struggle. ARs will warm with the atmosphere around them, causing the precipitation they release to fall more commonly as rain than snow. In turn, there will be a decrease in snowpack which provides water to the region for the majority of the year. The state will also see an increase in flood risk due to increased rainfall (3); California may begin to look more like the deep South with cars floating instead of driving down streets.

In California this is already starting to happen: the snow line has increased in elevation since 2008 (4), there is a higher proportion of rainfall than snowfall in that region (3), and total snowpack in the western US has declined by 15-30% (5). Not to mention the seven year drought in California that lasted from 2011 to 2017 that had everyone anxious about losing their beloved almond milk — almonds require a whole lot of water to grow and everyone was told to lay off their favorite vegan milk alternative. As these changes continue, climates akin to California will need to be sufficiently prepared for larger floods and longer droughts. They will also need to find ways to store flood water for when the snowpack is too light to last through the dry season.

So, it seems, these invisible sky rivers are not only surprising, but highly significant to many populations around the world. Who knew we would not only need to be worried about the cleanliness and water levels of our mountainous rivers, but also the temperature of the flying ones. While these rivers may seem out of reach, because they are literally in the sky and unimaginably large, all changes in activities that we take to slow atmospheric warming can help curb warming of ARs.

7) What are atmospheric rivers? (2015, December). Retrieved from
https://www.noaa.gov/stories/what-are-atmospheric-rivers