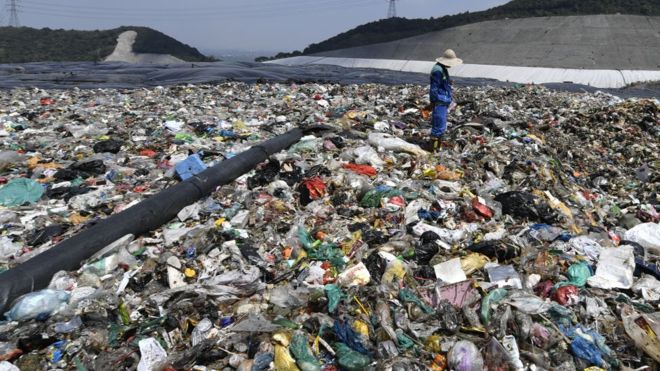 Jiangcungou is home to a 700,00 square meter landfill, with the ability to hold 49 million cubic meters of municipal waste.[2] Of China’s 1.4 billion populace it serves a mere 8 million and has reached its capacity 25 years early. The landfill in question is located in Shaanxi province and its sole user is the city of Xi’an. Like many cities in China, Xi’an relies heavily on landfills to dispose of all household waste. Which lead to daily deposition of 10,000 tonnes, nearly four times the planned capacity of 2500, leading to its closure over 2 decades early.[3]

While the landfill itself presents issues, it is synonymous with the issues the world faces. Without the ability to efficiently and economically recycle municipal waste, we are fated to         re-live the past as more and more landfills will fill and be decommissioned. Waste is being produced at increasing rate, with landfills as a result being used as a quick  and ill-advised method to deal with municipal waste.

Once full these sleeping giants lay dormant. Here, although out of sight the threat the waste presents is still very much there. Once a section of a landfill is full it is covered (seen as the black areas of figure 2) and becomes a source of methylmercury production.[4] Studies have shown that

landfills are polluting factors in gaseous mercury emissions.[5] The waste is still liable to leach and pollute soils and waterways.[6] Leachate is a product of water running through the waste and contains anything and everything soluble. Heavy rain is followed by high leachate output and in some cases waste landslides that often injure people and the environment.

In response to the issue China is facing, four more incineration plants are being laid and ready to be commissioned this year. Like landfills they are again a temporary fix for much large problem. However, within China there have been appeals to increase recycling in major cities and they project that 35% of household waste will be recycled by July this year. The fact that since 2017, China has banned the importation of 24 grades of waste has led to higher accountability of global rubbish production. Countries have had to process rubbish within their borders or seek other countries other than China to process it (which unfortunately is more often the case then not).

The Jiangcungou landfill while itself is a disaster it is similar to what is occurring all over the globe albeit at a smaller scale. The landfill is a bandage fix for a much larger issue, an issue that requires a complete reassessment of waste disposal as well as waste creation. Filling holes with rubbish is the most rudimentary solution to a worldwide problem. Although there have been steps in the right direction with countries banning single use plastic bags there are still  many areas of improvement. Preventing outsourcing of waste would be of great benefit in raising awareness of the true cost of our way of living. Without drastic changes now, generations to come are fated to deal with the sleeping giants we have left behind.

[7] China’s largest rubbish dump, which is 500ft deep and the size of nearly 100 football pitches, is FULL 25 years ahead of schedule. (2019.). [Untitled image of Jiangcungou landfill]. Daily Mail. http://news-af.feednews.com/news/detail/787d2adc