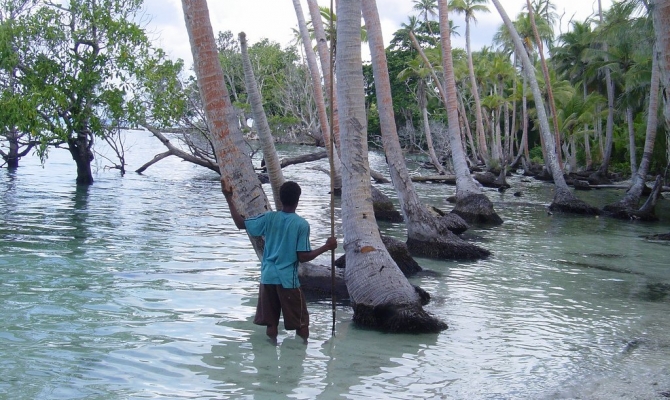 Sea level rise occurs by thermal expansion and the melting of ice sheets and glaciers. This is a serious climate issue and low lying islands are the ones that suffer immensely from the effects of rising sea level [1-2] . This includes many of our Pacific islands – people that could potentially lose what they have made their homes for hundreds of years. If sea level continues to increase, families that live on these islands will be forced to relocate and start all over again, adapting to a new way of living [3] . They lose their land and their connection to everything it represents – including their ancestors, cultures and traditions. Future generations will not be able to experience their culture the same way – or in a way that their parents would have wanted them to. Mass migration also causes stress on the environment as populations increase – resources are bound to become scarce. Moving to overseas countries that have their own traditions and having to adapt to those also means that keeping their own culture alive will be harder – potentially losing their cultural values and practices.

Global climate change and the increase of temperatures in the atmosphere has been linked to more extreme weather conditions [4] . Hurricanes and storms have proved to be more frequent and much stronger. One of the impacts of sea level rise is the increase in the risk of storm surges. This occurs when sea level is unusually higher than normal and due to sea level rise, land is pushed further inwards making non coastal areas vulnerable to damage [4] . This also means that people who live along the coast will be the ones that are affected the most. The warming and expanding of sea levels affects fisheries – and many people could potentially lose their jobs as waters become inhabitable for fish species. Storm surges threaten human infrastructure as well as the economy because it can cause damage to homes, roads, buildings etc and large amounts of money will be needed to be spent on repairing, replacing and helping families that are affected.

The increase in coastal flooding also raises health concerns. Research shows that constant flooding increases dampness within households that can lead to growth of indoor mold – this has negative impacts on the respiratory system and can result in symptoms such as coughing, wheezing, red watery eyes and chest pain [5] . During floods, access to resources such as food and fresh clean drinking water become limited. Supermarkets and businesses may shut down and water can be contaminated – therefore undrinkable. If consumed, diseases such as diarrhoea, typhoid fever, dengue become very common.

Sea level rise has the biggest impacts on low lying islands as there is massive land loss, causing mass migration that leads to the scarcity of resources. It also poses threats to human infrastructure and the economy as the impacts of storm surges are stronger. Continuous flooding caused by rising sea levels also results in unwanted diseases.