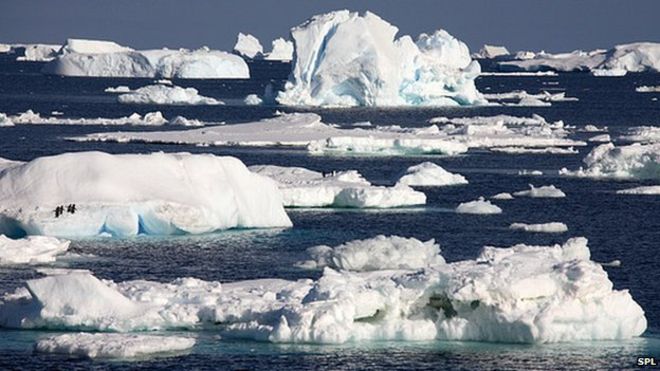 Alarming facts are circling the media regarding the inexorable effects of recent anthropogenic climate change on the Antarctic. One hot topic in this realm of science is the decline of sea ice around the circumference of the continent of Antarctica, see Fig. 1.1

As the sea ice fringes extend as far as 2200km from the coasts of the Antarctic continent at the end of the southern hemisphere winter, covering approximately 19 x 106km2 of the Southern Ocean, it is a crucial component in the Antarctica – climate change equation. 3 This floating layer of ice is suffering the effects of climate change and is also potentially accelerating the rate at which it is occurring. You might be thinking, how does this work? Here’s how:

This is a natural phenomenon that scientists call a positive climatic feedback where processes that are affected by climate change amplify/enhance this initial climatic adjustment. Ice and snow have very high surface albedo, which explains the ability of a surface to reflect solar energy. Sea ice reflects approximately 75% of the solar radiation it receives back into the atmosphere. 2

The positive feedback loop comes into play where there is a forcing in a system, in this case a human induced temperature increase via the greenhouse effect. As the Earth’s surface warms up the Antarctic’s sea ice growth ability is inhibited and the ice cannot extend to the normal seasonal maximums it has in the past and the minimums are reaching new extremes.6 Decreased surface area of sea ice locally decreases the albedo, meaning the amount of solar energy being reflected back in the atmosphere also decreases. Consequently, more solar energy is being absorbed at the dark ocean waters surrounding the extent of the sea ice which has a hand in accelerating global and local temperature rise, and the feedback loop continues, see Fig 3.

If the sea ice recedes enough to expose the coastline it can severely alter the natural landforms at these proximities. An example this is occurring in the Weddell sea at the northern end of the Antarctic peninsula where sea ice retreat in combination with surface ocean warming has initiated has the degradation of the Larsen Ice Shelf. 4 Ice shelves are large bodies of floating ice that are attached to polar coastlines, commonly fed by glaciers. Sea ice that sits in front of these ice shelves act as a buffer for the shelf from the action of the ocean surrounding it. 6

Sea ice can also affect the local movement of oceanic water which hugely influences global climate. Despite the ocean under the Antarctic sea ice being saline, the sea ice itself is actually relatively fresh despite some salt crystals stuck in air bubbles. When sea ice forms it push’s most of the salt crystals into the water below which creates a density difference causing the sea below to sink due to the greater concentration of salt in these areas. 5 This cold dense water sinks and moves towards the equator whilst the warmer waters at shallower depths migrates towards the pole. Therefore, sea ices life cycle around Antarctica contributes to this conveyor of cold water moving north and if the amount of sea ice fluctuates it could disrupt the regular ocean circulation as described, contributing to global climatic change.