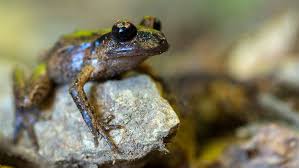 How often have you seen a native frog in your local bush or forest? If your answer is ‘not often’, maybe there’s a reason. It has been well-documented that amphibian populations have been declining steadily in recent years1,2 – documenting as early as 19903. Dangers are around every corner for some of our most vulnerable friends, but human observation and interference is one solution to saving our wildlife.

How are their populations doing?

New Zealand has only 4 native species of amphibians, all of them endemic frogs.5 A 2017 DOC study6 of amphibian populations showed that although all species of frogs are still threatened or at-risk, 2 have improved their conservation status between 2013-2017. Hamilton’s frog has a small population of ~300 living only on Stephens Island5 but its status had actually improved from the worst conservation status possible. This study found the Maud Island frog to have minimal difference to Hamilton’s frog, so both were counted as one species. It was estimated that Archey’s frog populations had declined by 88% between 1996-2001,7 yet their status also improved. The Hotchstetter’s frog has the largest population size but is still considered at-risk.

It’s important to note that this data was taken in 2017. Populations can change easily with factors such as human interference, and with such small-bodied participants, populations may be difficult to accurately assess.

The most likely causes of population decline are predation, habitat destruction, disease, and pollution.8

NZ’s conservation management (including DOC and Auckland Zoo10) have been providing predator control on offshore and mainland islands through methods such as baiting stations, and they have created safe zones for amphibian translocations. These zones are kept free of predators and pollution, and give amphibians diverse habitats to thrive in. The clean, pollution-free zones are especially important for frogs because they absorb chemicals through their skin. Previous translocations are probably one reason why frog populations had increased between 2013-2017.

You can help preserve NZ’s biodiversity! Bin your rubbish so it doesn’t end up in amphibians’ habitats. Think about your waste – including what ends up in the waterways. Plant native bushes and trees for NZ’s native animals. Finally, report to DOC if you spot any native NZ amphibians. And maybe it will be humans taking the leap to save our frogs.

8 Bell, B., Bishop, P. (2018). Status of decline and conservation of frogs in New Zealand. In Status of conservation and decline of amphibians: Australia, New Zealand, and Pacific Islands (pp. 185-199). CSIRO Publishing.