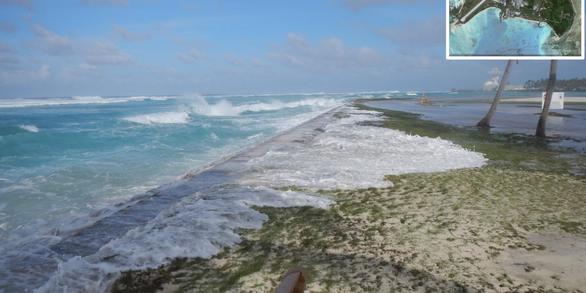 Rising sea levels and increased intensity of storm surges are playing a considerable role in the degradation of coastal regions in the Pacific Islands. Sea level rise within the Pacific has already surpassed the 2007 estimate from the Intergovernmental Panel on Climate Change and further predictions infer a further 2m increase within the century. [1] This is particularly concerning for many island nations, many of which are situated on low lying elevations. A report produced by SPREP acknowledges the fact that over the last several decade’s extreme climatic events such as storms, cyclones, floods, droughts and heatwaves have been increasing with unusual regularity, however, not only have these events been increasing they have been occurring at an intensity that far exceeds their usual rate.[2] These two phenomena, most commonly linked to anthropogenic warming and human-induced climate change are causing mass problems for the Pacific Islands, most notably in regards to erosion and loss of land.

Many islands within the Pacific are surrounded by coral reefs. These reefs provide the islands with a natural barrier that work towards reducing the strength of incoming storm surges. As sea-level rise increases, it begins to outpace coral reef growth, limiting the effectiveness of this barrier. The increased intensity of storm surges coupled with the ineffectiveness of the coral reef barrier is leading to considerable coastal erosion in the Pacific Islands. Coastal erosion is occurring at an alarming rate within the Pacific Islands. One, particularly concerning example, is Ngaraad, Palau where there has been a significant change to the island’s coastline over the years. Scientists have noted that the shoreline has been continuously eroding since the 1990s.[3] This is a huge concern amongst the Ngaraad community who are seeing large portions of their land being lost to the sea. The loss of land due to coastal erosion is a serious problem for many Pacific island communities as it limits development and threatens coastal infrastructure. For a region, that is heavily reliant on tourism and it’s fisheries this creates huge problems in terms of livelihoods and standard of living.

Ideally, the best way to save these islands is to reduce our greenhouse gas emissions. Increased levels of greenhouse gases from human industry and agriculture are the root cause of the erosion occurring within the Pacific Islands. Greenhouse gases, particularly carbon dioxide are great absorbers of heat radiation coming from the Earth’s surface. An increased level of them is comparative to a blanket and results in a surface that is warmer than it otherwise

should be. [4] An increase in global temperature leads to melting of the ice caps which causes the ocean to expand and sea level to rise. The addition of heat-trapping gases in the atmosphere and their effect on global temperature also strengthens existing climatic patterns, such as cyclones, floods, droughts and heatwaves. These two factors are ultimately a result of anthropogenic warming and human-induced climate change and a global effort is required to reduce these emissions if we want to save not only the Pacific Island’s but our Planet as a whole.