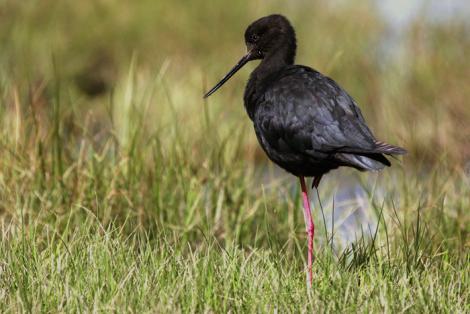 The taukī above proclaimed by Arowhenua Māori School fits perfectly with the undoubtedly successful conservation story of the kakī.

There there are significant hurdles to establishing a permanent breeding population for the species, though.

A brief kakī history
The kakī live in one of the most extreme environments in New Zealand: the Mackenzie and upper Waitaki basins. Temperatures can soar to 40 degrees in summer, but the birds’ wings will often freeze in winter as temperatures can plummet to -20 degrees. But while some riverbed birds migrate to other areas, the kakī remain in their habitats year-round, making them extremely vulnerable to predators such as wild cats, stoats, ferrets and rats.[2]

Kakī numbers dropped to an alarming 23 individuals in the wild in 1981, leaving it as the rarest wading bird in the world.[2]

How did it become so dire?
Kakī were essentially forced from their homes through riverbed modification and wetland drainage for agriculture, and by mammalian predators. They are not migratory birds and lack the defence mechanisms to protect themselves and their offspring from predators. Further, the basin area is also now home to the poaka, the Australian native pied stilt. While genetically similar, these migratory birds are better suited to the presence of predators, and now outnumber kakī 30 to one.

With such a tiny population, kakī struggled to find mates, with hybridisation posing another challenge for the species.[5] Hybridisation occurs when one species mates with a different, but genetically similar species.

Kakī mate for life, so hybridisation with the poaka forfeits their place in the breeding population. This brings even further challenges for the genetic diversity of the remaining kakī.[4, 5]

To manage these threats, the Department of Conservation initiated the ‘Black Stilt Recovery Plan’ in 1993, which has led to a miraculous kakī recovery.[2, 4]

Rere atu taku pepī
The success starts with DOC’s captive breeding programme based in Twizel.3 Eggs are collected by breeders and incubated in the facility, allowing experts to boost their survival chances. As the birds get older, they spend more time in the aviary to learn the ropes of being a wild bird, before getting released back into the wild as an older juvenile.

Te Manahuna Aoraki, a DOC-funded conservation project in the Mackenzie Basin and Aoraki / Mount Cook, also works to protect these taonga (Fig. 3). They work to increase biodiversity in the area by removing weeds and predators (011), with native birds now able to flourish in a more kakī-friendly environment.

Rere atu taku kakī
The results so far have been outstanding. In 2020, 169 kakī were counted living in the wild, up by 40 from the previous year. This is the largest increase in the kakī population since the recovery programme began.[2] And with another 130 juveniles released in 2019, it will be exciting to see where rejuvenation efforts lead to next. Let’s hope that the kakī will rere atu into a new age of wetland dominance!