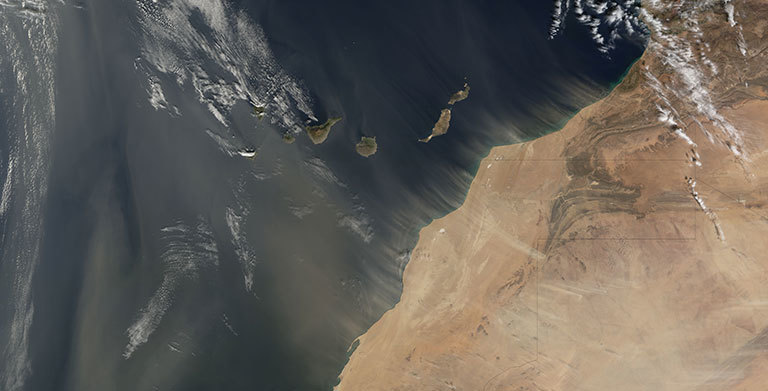 The Amazon rainforest covers an area of 6 million square kilometres in northern South America [1]. It is one of the most biodiverse places in the world and the home to around 3 million different plant and animal species [2]. Unfortunately for the species that inhabit the rainforest, 75% of Amazonian soils are acidic, infertile, and nutrient-deficient [3]. Due to heavy rainfall, high levels of phosphorus continually leech out of the soil into streams and rivers, resulting in phosphorus deficiency in 90% of the soils [3, 4]. Phosphorus is essential for plant growth, and the Amazon depends on it to support its estimated 390 billion trees [5]. To replenish the phosphorus in its soils, the Amazon receives help from a surprising relationship with the Sahara desert.

Transport of Saharan dust to the Amazon rainforest

The Sahara desert is the largest hot desert on Earth, covering 9.4 million square kilometres [6]. The desert is located in Northern Africa, 3,000 miles away from the Amazon rainforest [6, 7]. The Sahara desert has been called “the dustiest place on earth”, and every year, 180 million tons of dust blows from the desert across the globe [8, 9]. The main source of this dust is a region called the Bodélé Depression that is situated in Chad, along the southern edge of the Sahara desert [10, 11]. Either side of the Bodele Depression are mountains that form a wind tunnel, that directs strong winds straight into the depression [10]. The winds pick up Saharan dust, which then travels across the Atlantic Ocean to where it is deposited in the Amazon basin [4]. Every year, an average of 28 megatons of dust blows from the Sahara to the Amazon basin [12].

Thousands of years ago, much of Chad was covered by a freshwater lake called Lake Mega Chad [8].
This lake then receded into the much smaller Lake Chad that is present today, uncovering areas such
as the Bodélé Depression [8]. The areas once covered by this great lake were left with dust rich in
phosphorus, from the remains of the freshwater organisms that once inhabited the lake [8]. This
phosphorus is then picked up with the dust that blows out of the Bodélé Depression. 22,000 tons of
phosphorus is transported in dust from the Sahara to the Amazon every year [12]. This is only a very
small amount of the total phosphorus required by the Amazon rainforest, however, it is of great
importance as it compensates for the amount of phosphorus that is leached from the soils in rainfall
every year [14].

Impacts of climate change on the Amazon rainforest

The Amazon rainforest relies on the deposition of dust from the Sahara esert, which will be affected
by climate change [14]. The amount of dust transported from the Sahara desert each year depends on the amount of rainfall in the Sahel region in the year prior [12]. Rainfall levels in the Sahara desert are likely to increase as a result of climate change, which will lead to a reduction in the amount of
nutrient-rich dust that is transported to the Amazon basin [12, 15]. Reduced levels of phosphorus
deposition from Saharan dust will result in depletion of phosphorus in the Amazonian soils [12]. This
could have devastating consequences for the species that inhabit the rainforest, as sufficient nutrient levels are critical to support the Amazon’s biodiversity [3]. It is incredibly important to consider this relationship with the Sahara Desert in conservation strategies for the Amazon rainforest [16].